There’s nothing worse then flipping through the merch rack at a record store and finding nothing but the standard dad-rock centric tees. You know the ones – ACDC, Metallica, Kiss, Led Zeppelin and Thrasher are always in abundance and they’re almost always only stocked in the one size and shape.

Thankfully, the 24Hundred store in Richmond (owned by the UNIFIED Music Group) is rebranding itself in a quest to become the home of band merch in Australia, meaning products by the likes of Midnight Oil to Bad Brains, and Paramore to Luca Brasi, are available at a click’s distance.

“I’m not going to put an offer on someone who is oversaturated in your Cotton Ons and your H&Ms. I’m not going to mass-produce Metallica merch – it’s been done,” says general manager of UNIFIED Merchandise Services Graham Muir, who got his start in the business as a punter, collecting band tees since he was 14. “But I’ll work with Aussie artists to make sure they’ve got a sustainable business.”

Now six years old, the 24Hundred storefront grew out of stocking heavy artists and now represents labels like Hopeless, Pure Noise, Sumerian, Victory, Trial & Error, as well as brands such as Afends, Dickies, and their very own UNFD.

Muir says the t-shirt sales of artists like Amity Affliction, Tash Sultana and Violent Soho are surprisingly sustainable, something he wasn’t expecting after coming from a retail background to join the UNIFIED group two-and-a-half years ago.

“It blows my mind to see the numbers that Violent Soho do as someone who’s come from retail and [has worked] with big brands. The numbers that they do are quite respectable on a very frequent basis,” he says.

The services go beyond a traditional fulfilment model

“[Previously] we’d have just fulfilled the order and worked in the background,” Muir says. Now, the Unified Merchandise Services work with artists and management by providing a designer, photographer, videographer and digital marketer as well as account management. “Our job to listen to the short and long-term game that they want to play and help them create a narrative,” Muir explains.

The outlet goes to great efforts to help personalise the merch of the artist’s they’re working with. They currently stock a Luca Brasi guitar pedal made by the guitarist himself with the help of Red Sun Music and all of Earthwalker Tribe’s shirts (the brand of Jake Taylor, frontman for Byron Bay’s In Hearts Wake) are sent out with a little packet of seedlings. 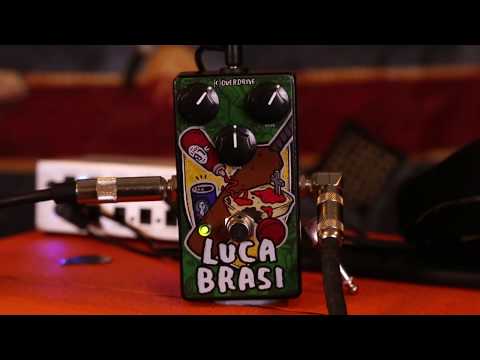 “It’s very much [based on] a relationship working with the artist managers or label heads and making sure that something as simple as a T-shirt really gets the respect and attention that it deserves,” says Muir.

24Hundred claims to know what does and doesn’t fly in terms of maximising sales, how to avoid unnecessary waste, and most importantly, the logistics of putting together a great tee.

“I mean it’s all well and good that you think you’re the next person who can make a tall purple t-shirt with quite a loud print on it, but we almost have to play the intermediary where we maybe creatively show them other options,” Muir explains as an example.

“We kind of have to be the voice of reason in a way. We could just print that shirt, sell it and just send them the bill at the end, but it’s about working with them to make sure that they’re not left with leftover stock. While it might look great creatively, we also have quite a bit of data to work with them to make sure they’re making informed decisions as opposed to working on pure emotion,” he explains.

While the world of merchandise is often restricted to include a few simple variables – colour, garments, seasonality, placement of logos and embroidery – Graham says, “those details are the subtle point of difference.”

He claims 24Hundred’s growth has come from keeping a keen eye on e-commerce trends and keeping up with consumer expectations. “The growth in our business particularly can’t be attributed to all the right moves that we’re making, it’s also the growth e-commerce in Australia and the world as well.

“Things like expecting 30-day returns, and expecting to order something on a Thursday and have it by Friday. Even things like afterpay, which we have. The evolution of e-commerce in Australia has really helped us as well. We really try and stay agile in that space.”

As for now, 24Hundred are planning more in-store meet and greets, parties and putting their focus into supporting their artists’ campaigns. “We’re not going to be a fast fashion retail empire and will never want to be – we’re about the artist and providing the means for the artist.”