If you haven’t visited The Lefsetz Letter, you’re probably in the wrong industry.

Just a couple months shy of 15 years in action, Bob Lefsetz’ blog is a living think-piece, straight from the brain of the California-based former attorney and label insider.

Lefsetz takes no prisoners. Labels. Has-been rockers. And dammit, if he wants to write about the experience of kids screaming all night at One Direction, he’ll jump on that too.

Lefsetz touches down today in Australia, ahead of the Australian Music Week which kicks off Wednesday (Nov. 6) with a keynote interview featuring Big Day Out co-founder Ken West. The chat and others will go live on The Bob Lefsetz Podcast.

Lefsetz has a busy scheduled ahead of him with a raft of keynotes and panel discussions through the week at Cronulla’s GU Filmhouse.

TIO caught up with him ahead of AMW for a round of quick-fire questions.

Hi Bob, I’m looking forward to seeing you in Sydney later this week. Will this be your first time in Australia and what are you expecting from the experience (what else will you do while you’re here)?

No, I was in Australia in 2007, for Phil Tripp’s music conference. I’m looking forward to taking the pulse of the Australian music scene, as well as the country itself!

What are your thoughts on the Aussie music scene and how our music has travelled to the U.S.?

There was a huge surge in the eighties, Aussie bands are the best live performers. It’s harder to make it via live as opposed to records…but if you do it this way, you last longer. The whole scene is in flux in America, it’s not the way it used to be, it’s not only about chart hits.

Streaming has been exploding in Australia in recent years, though there are signs the rate of growth is slowing. Should the record industry be concerned that a boom-bust cycle is inevitable?

There will be no bust. There are only so many people in the world! So inevitably, subscription numbers will not grow at a geometric rate.

That the media and the major labels are out of touch with everything but hip-hop and pop. They’re focused on an ever smaller world when what’s outside that world, all the genres, all the live shows, is where not only the excitement is happening, but scenes are growing and growing.

Your on-stage encounter with Gene Simmons at Canadian Music Week was epic. In the decade since, countless people have expressed issues with the guy, and he was famously banned for life from Fox News over his behaviour. What was the last thing he said to you. Are you a combative guy by nature?

Most people have two personalities, the public one and the private/real one. With Gene Simmons, what you see is what you get. He wouldn’t even shake my hand at the end. But I was right, he didn’t break an act in Canada, nowhere close! 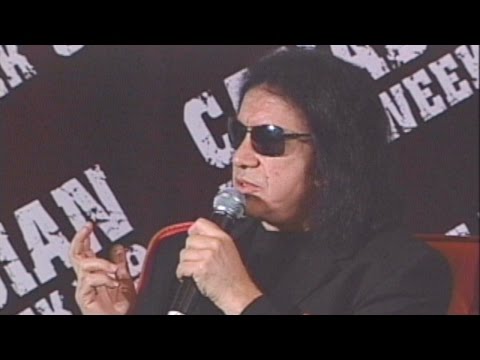 What should we expect from your session on stage in Australia? Will we see you engage in any onstage battles?

Only if the people are ignorant Luddites!

For more on AMW visit australianmusicweek.com and for tickets, click here.