Kylie Minogue has made a stunning return to the ARIA Charts this week, with her newest album scoring No. 1s left, right and centre.

The 51-year-old’s latest full-length, a greatest hits collection dubbed Step Back in Time: The Definitive Collection has topped the Albums, Australian Albums and Vinyl Albums charts.

This is the first time on record that an artist has ever topped all three of these charts consecutively, furthermore doing so with a greatest hits album.

Kylie also rules the U.K. albums chart, as Step Back in Time becomes her seventh No. 1 in her adopted homeland. She joins the likes of Coldplay, Elton John, Barbra Streisand and Take That on seven U.K. No. 1s. The only female solo artist with more is Madonna on 12.

ICYMI: @KylieMinogue is the queen of this week's Official Albums Chart. Step Back in Time: The Definitive Collection is Number 1! https://t.co/Rsh7AvsLqT pic.twitter.com/fkAoZK5Ciu

Kylie Minogue’s Step Back In time: The Definitive Collection has bumped Billie Eilish’s WHEN WE ALL FALL ASLEEP WHERE DO WE GO? down to No. 2.

Meanwhile, Chris Brown’s Indigo has come in at No. 3, becoming Brown’s sixth Top 10 debut, which is followed closely by The Black Keys’ Let’s Rock, placing at No. 4.

Other new entries in the ARIA Albums Char this week include Daniel Caesar’s CASE STUDY which debuted at No. 26 and Lang Lang’s Piano Book, which scored a No. 49 debut.

Though, Shawn Mendes has taken his throne on the Streaming Singles Chart, placing ‘Old Town Road’ at No. 2 there.

New entries to the Singles Chart include ‘Beautiful People’, the new track from Ed Sheeran and Khalid.

Chris Brown’s Indigo has tracks making movement in the Singles Chart, too, with ‘Don’t Check on Me’ scoring a No. 20 debut.

As mentioned above, Kylie Minogue’s latest album has topped the Australian Albums Chart, just one place ahead of Morgan Evans’ Things That We Drink To, which reentered this week at No. 2.

The only other new entry this week was Joji’s Ballads 1, which just squeezed its way in at No. 19.

Tones and I’s ‘Johnny Run Away’ has moved down one place, to No. 2, following Guy Sebastian’s ‘Choir’ climbing to the top spot. Tones And I, however, is currently also occupying No. 3, too, with ‘Dance Monkey’.

Kylie Minogue’s record-breaking week is made possible by her topping of the Vinyl Albums Chart – also for her latest album.

The Black Keys’ Let’s Rock has come in hot at No. 2, preceded by Joy Division’s new record Unknown Pleasures (4oth Anniversary) which has debuted at No. 3.

Melbourne’s The Beautiful Monument have also squeezed into the Vinyl Albums Chart with a No. 8 debut for their new LP I’m The Reaper. 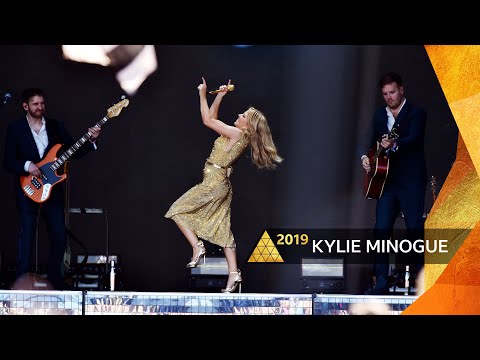