As it turns out, the Agency is one of the biggest champions of Australian live music, with acts like Vance Joy, Middle Kids, Tash Sultana, Amy Shark and Hiatus Kaiyote all inked to the roster.

In order to gain insight into how international bookers nurture, discover and break local talent, TIO chatted to Paradigm’s Jackie Nalpant, who has been working with the company in California since 2001, Rob Zifarelli who opened Paradigm’s Toronto office in August of 2017, Kevin French who merged his company Bigshot Touring Artists with Paradigm in 2009, and Lucy Beach, who was offered the role from an Agent friend at a show one night in LA.

Read our full Q&A with the four booking luminaries below:

Tell us about how you came to look after one of the Australian acts on your roster?

JACKIE: Tash Sultana. A coworker / friend of mine in our TV/Lit department sent me a YouTube link of Tash. I was blown away by Tash’s talent, passion and craft.

I reached out to management and a few phone calls later we signed Tash Sultana.

ROB: I represent over 15 Australian artists and first started with Xavier Rudd 15 years ago as he was developing his career in North America.

My career developed through booking clients on music festivals, and Xavier has always been a festival favourite. We met at a festival that long ago and I started first booking his Canadian business, and then shortly after that took over his Australian live business, which gave me the opportunity to travel to Australia.

Watch Xavier Rudd’s video for ‘Walk Away’ below:

From there I developed my relationships, and that was my springboard into representing many Australian artists. I LOVE AUSTRALIANS.

My other clients include Vance Joy, The Cat Empire, Tash Sultana, Boy & Bear, Amy Shark, The Paper Kites, Airbourne, and a few others.

KEVIN: I have twice attended the BIGSOUND conference in Brisbane where I came across some great Australian talent.

LUCY: Fazerdaze – I was visiting a friend in Sydney and he dragged me along to “some band he was supposed to check out” that I had never heard of. The band sounded great, I met the manager that night, and that was that! A happy coincidence.

What’s the key to nurturing an artist not based in your territory?

JACKIE: I think knowing when to come over to the States. It’s a far trek from Australia and it is not cheap.

So, planning ahead of time and making sure the routing is meaningful is most effective for the band’s US touring. Festivals, of course, are a very big part of the touring equation.

ROB: Having a long-term strategy is key. I try to build out complete record cycle plans that span two years usually, and then it’s all about execution.

Having a thoughtful and realistic manager and artist helps keep my motivation high.

KEVIN: The timing of bringing over an Australian artist must be right. If there is nothing going on yet in the US for an Australian act coming over for the first time, it can be a big waste of time and loads of money!

The US is a big territory and finding the right opportunity is crucial.

LUCY: Do your research. Ask friends you might have in those places for their honest advice.

Paradigm’s roster covers film, theatre and publishing too; is there much cross-over for your artists who aspire to delve into those fields?

JACKIE: Not so much for me, but it is for many of my other co-workers’ rosters.

ROB: The opportunities exist for all our artists to develop their career along many paths within the entertainment industry, but this takes time and proper development.

We first have artists meet with the experts in each department to gauge the viability of it. Where there’s a will there is a way, but it takes a lot of work.

KEVIN: There are a handful of artists I work with who are both interested and able to take advantage of our other departments. For the most part, I work with acts who are mainly focused on music for now.

LUCY: Not so much for the artists I work with as they are mostly smaller acts who are still developing.

What advice do you have for Australian acts who are seeking an international booker?

ROB: The best advice I have is that you need to get it started at home. There needs to be tangible success and buzz in an artist’s home territory to prove the concept of their project.

Then you take those stories abroad in hopes you pique someone’s interest.

KEVIN: You first need someone who is going to help pay the bill (not an agent). Again, just to travel to the US is a major expense and for most artists seeking their first international agent and touring opportunity, there will not be a whole lot of $$$.

Once you’re ready to make the jump over here, finding the right agent who works in your genre of music and has a plan for you is key.

LUCY: I’d suggest they look for someone who genuinely loves the music. Someone who has the time, dedication and passion to devote.

What do you see as your core responsibility when it comes to your artists?

JACKIE: I feel my core responsibility for my artists is to provide well-thought-out / planned tours. Getting the right rooms, the right deals, the right time frame.

I also feel it is important that I introduce the band to the influential promoters and festival bookers in America and get them excited, invested in the artist.

ROB: My job is to get exposure for an artist to promoters, festivals, DSP’s, and to then find them opportunities to perform live.

KEVIN: Advising and implementing the plan to keep growing and achieve that next level. There is always a next level.

LUCY: I think it’s important to be honest and manage a band’s expectations accordingly. Be 100% supportive & work hard but at the same time don’t promise the world if you’re not going to deliver on it.

What do you wish you knew back when you first entered the music industry?

JACKIE: To learn better how to balance work and family. It’s difficult at times.

KEVIN: Everything I know now. There is no real school when it comes to this job. You have to dive in and be willing to work hard, it doesn’t happen overnight.

LUCY: At the end of the day most bands just need hummus and booze in the dressing room.

What advice do you have for those wanting to make a difference in artists’ careers through booking?

JACKIE: Do great work, pay attention, ask questions, be sure to use the team to its fullest. Only sign what you connect with personally.

Don’t chase the ‘BUZZ’ all the time. People take notice if your roster is really your roster, and respect your artists more when they know they are important to you as a true artist and not just a touring band.

Your reputation and good work make a positive impact on your artist’s career.

ROB: You must have unwavering loyalty and belief in your artist.

Relationships are everything, so get out there and meet people.

Don’t be mean. Nothing worse for your career than being the person others hate.

This is a business of favours, and if you’re a jerk none will come your way.

KEVIN: Work with artists you’re truly passionate about. A lot of work goes into making a difference and building a career, and it definitely helps to love the acts you work with.

I couldn’t imagine having to go out to some crappy club on a Sunday night for a band I didn’t want to see! 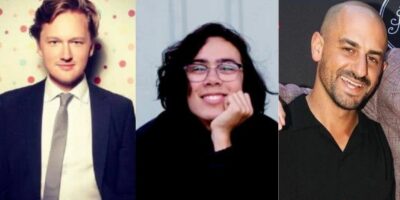