E^ST has joined the Fueled By Ramen family

E^ST joins the Fueled By Ramen family, which includes Panic! At the Disco, Paramore, All Time Low and Twenty One Pilots. Welcome to the family! E^ST, the rising Aussie newcomer, has signed with Fueled By Ramen, the U.S. alternative rock label which is home to chart titans Panic! At the Disco, Paramore, All Time Low and Twenty One Pilots.

“We’re so excited to welcome E^ST to the Fueled By Ramen Family,” the company enthuses in a social media post. The New York-based record company is also promoting her cruisy new track “I Don’t Lack Imagination” on its homepage.

It’s been a fruitful couple of months for E^ST (real name Melisa Bester), who has quietly assembled a professional team which now spans the globe and includes a management deal with Saiko, the Scott Maclachlan-founded boutique firm with offices in Auckland and New York.

The Central Coast singer and songwriter made her own luck when, as a teen, she uploaded a track to Triple J Unearthed. The action hasn’t stopped, and E^ST has since released three EPs, “Old Age,” “The Alley” and “Get Money!”

E^ST just wrapped up a national run and she’ll head back out on the road later this month in support of Amy Shark on her “Love Monster” tour of Australia, kicking off Aug. 24 in Adelaide. 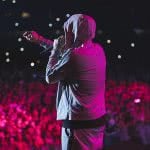