Foo Fighters just scored their second ever #1 album in the U.S. For all of their success, Foo Fighters had only reached the summit of the U.S. Billboard charts once before this week, first hitting the #1 spot with 2011’s Wasting Light. Now, they can add a second notch on their bedpost, with new album Concrete and Gold topping the chart, having already notched an ARIA #1 earlier this week.

As Billboard reports, the record topped the Billboard 200 chart with 127,000 equivalent album sales – 120,000 of them being traditional sales, and the rest streaming. Released on September 15 through Roswell/RCA, it ended the week as the highest-selling album, with the full chart set to drop tomorrow.

The record needed to beat out challengers including Lil Uzi Vert’s former #1 album Luv is Rage 2, and last week’s #1, Life Changes by Thomas Rhett. Kendrick Lamar’s former #1 DAMN. popped back up to fourth place, while XXXTentacion and Khalid follow closely behind.

A rare result for a rock album, then, with Billboard noting that only four others have hit the top of the charts this year, from LCD Soundsystem, Brand New, Arcade Fire and of course Linkin park, who notched their 7th #1 album, now tied with Metallica. In all, it’s been a tough year for rock, which officially lost its place as America’s favourite genre for the first time, being beaten out by the combined forces of hip hop and RnB.

While Foo Fighters have only nabbed one #1 album in the past, they’ve had 12 entries on the Billboard 200 in their careers, with 8 entries in the top 10, the first being their 1997 sophomore LP The Colour and the Shape.

They’ve been doing a great job promoting Concrete and Gold, for sure, including one of the best Carpool Karaoke episodes we’ve seen so far, with so much air-drumming (and actual drumming) that our arms get tired just watching it.

With Foo Fighters’ Australian tour with Weezer on the way next year, we’ve also seen some great Aussie-themed performances lately too, with the guys belting out a seriously great version of AC/DC’s ‘Let There Be Rock’ with The Hives frontman Pelle Almqvist, and then another version of it on the BBC, not to mention their trip over to Australia to play a surprise gig with their covers band Chevy Metal.

Check out the making of their latest #1 album below. 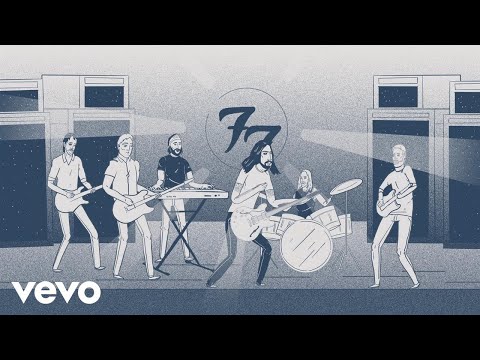