The Hilltop Hoods have partnered with CanTeen as part of a new initiative that aims to give access to gigs and festivals for cancer-affected youth.

Back in 2014, it was revealed that the son of Hilltop Hoods’ Daniel Smith (aka MC Pressure) had fought a long battle with leukaemia. Thankfully for everyone involved, young Liam Smith eventually went into remission for his illness, though it left his dad wanting to help out the other young Aussies facing the horrible condition.

Now, the Hilltop Hoods have partnered up with CanTeen to launch the Side Of Stage initiative, which aims to help young music-lovers battling through cancer.

Conceived by the Adelaide icons, Side Of Stage provides special access to gigs and festivals across Australia to young people affected by cancer.

“Cancer is something that affects us all at some point in our lives, whether a personal struggle or someone close to us,” explained the Hilltop Hoods. “We seek to empower and give strength to the suffering.”

As CanTeen explains approximately 23,000 young Australians between the ages of 12-25 are impacted by cancer every year. This number includes those dealing with having cancer themselves, or those affected by friends, parents, or siblings having cancer, or those who have lost a loved one from the disease.

While the Side Of Stage initiative was conceived and spearheaded by the Hilltop Hoods, they’re just one of many who have shown their support for this initiative, with organisations such as Chugg Entertainment, Groovin the Moo, Universal Music Australia, and Moshtix all taking part.

Likewise, a number of musical artists have signed on as ambassadors for the initiative as well, including Stella Donnelly, Kingswood, Illy, Holy Holy, Montaigne, and West Thebarton.

For more information about CanTeen’s Side Of Stage initiative, including how you can take part and help out, be sure to head along to the official website.

Check out the CanTeen Side Of Stage launch video: 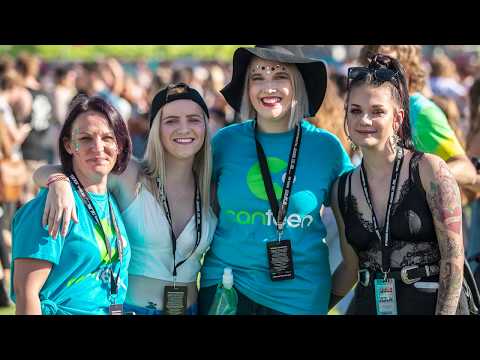 Side of Stage Supporters

Side of Stage Ambassadors