How a viral comedy song tricked its way into the charts It started with a BBC Radio appearance.

Towards the end of August, British comedian Michael Dapaah went on popular radio show Fire In The Booth, where he introduced two comedy characters: MC Quakez and Roadman Shaq.

A silly freestyle rap over 67 and Giggs’ ‘Let’s Lurk’ quickly went viral, with people baffled as to the intentions of this Roadman Shaq dude. He became the subject of numerous memes, which are comparable to the catchphrases of the ’80s. Meaning: if you happen to coin a popular one, turn it into actual coin as soon as possible.

Dappah did just this: changing his moniker to Big Shaq, signing to Island Records, and adapting the freestyle into a commercially-available single named ‘Mans Not Hot’ — lack of apostrophe almost certainly intentional.

For those who haven’t seen the clip, it’s basically a man stunting about how, despite the climate, he can wear a thick jacket and not even be hot.

It’s a silly thing to brag about, which is the crux of the humour (for those who enjoy having jokes explained). It’s similar to fellow comedic-rappers The Lonely Island’s misguided braggadocio about being on boats, or having weird-looking genitalia.

The joke was lost in translation many times over, as the track spread around the world (or across, if you’re a flat-earther). Even his namesake Shaquille O’Neal took offense at the idea of another Big Shaq making waves, when The Roots introduced him to the song during his appearance on Fallon’s show. O’Neal teamed up with Toronto rapper ShaqIsDope — who, unlike Big Shaq, obviously has the big man’s blessing — to record a reply/diss track. It was out within six days.

“Keep in mind, there’s only one Big Shaq, it is I,” O’Neal spits. “The originator, the dominator, the creator. Don’t you ever call your name Big Shaq.”

“Me and you could never get along. Please never make another song,” adds ShaqIsDope.

Not surprisingly, one of the most notable celebrities of the past 25 years slamming ‘Mans Not Hot’ had somewhat of a Streisand effect and the song continued to spread like lice. A video clip featured DJ Khaled, Waka Flocka and Lil Yachty, which suggested a tacit endorsement of the rapper and his skills (as well as a direct one from Khaled who called Big Shaq a legend).

Was it real? Who cares? It’s real.

In the U.K. the song hit #5, selling over 200,000 records. ‘Mans Not Hot’ is selling in Australia as well. The song entered the ARIA Charts on November 19 at #47. It climbed to its current peak of #34 two weeks ago, slipped back a spot, and is now on track to land well within the Top 30 on this weekend’s chart.

Regardless of why people are drawn to the tune, they are. And Big Shaq is skrrrahh-pap-papping all the way to the bank. 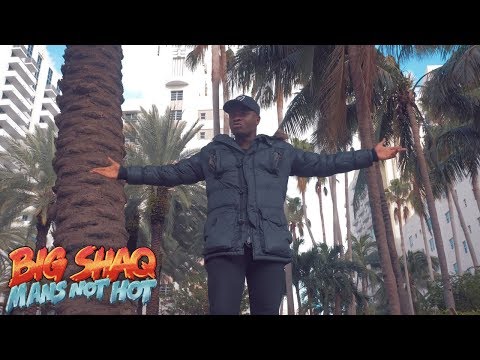