How to not kook a band interview Interviewing bands is the best part of music journalism, and one of the most coveted roles so it makes sense that everyone wants to do it. But there are certainly ways of doing it wrong. A hundred things do need to be done right for the interview to be decent, and only one thing needs to go wrong for it to be kooked. Trust me, I’ve kooked plenty. 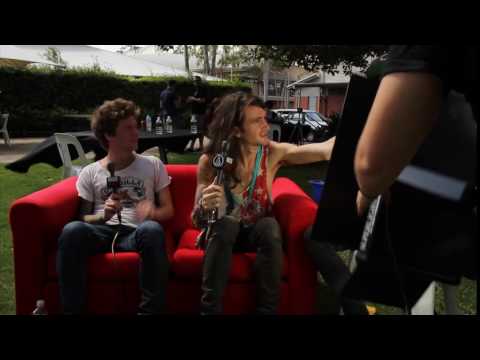 There’s a lot to be said for how artists treat music interviews, and music media in general, but that’s another article for another time, from another person.

Having interviewed just about any artist who’s released or toured in the past five years, whether it be via email, over the phone, on camera or live broadcast, from Oscar winners and icons to local start ups, I’ve picked up a few things. Things that you can’t pay to learn… Well, things that you shouldn’t pay to learn. And here they are.

As email Q&As require little to no actual human interaction, they’re a popular interview format for all involved in the interview kill chain; from journalist to editor to publicist to management. Everyone but artists. They’re talking about their art, their creation; their passion. They want to talk around and speak with their hands, not type with them.

Email Q&As are a good place to start for first time interviewers or small blogs. You’ll never make them not painful for artists but you can make them slightly less painful.

Carefully craft open ended questions for artists, give them as much detail as possible but if you’re adding a brief for them, make it just that, brief. Be prepared for short answers that come nowhere near your word limit. If an artist does offer haphazardly typed out and far too brief responses, you’re well within your right to ask for a do-over. Ask the artist’s contact if they wouldn’t mind elaborating.

The main thing about phone interviews is they’re awkward AF. Phone grace is a rare human trait and the likelihood that two people on the same call, at the same time, would both possess it, is slim. International phone calls will also have a delay, sometimes a couple of seconds, so you will talk over one another at certain points. You’ll both apologise, and you’ll both tell the other to continue what they were saying, at the same time.

To break the ice, spend the first two-three minutes building rapport. Keep in mind you have NO idea where they are or when it is. It could be 7am after two long haul flights. The best way to find out? Ask them: ‘Where in the world are you right now?’

Phone interviews allow for bounce back, which is a secret weapon in artist interviews. Bounce back, or back and forth, really is when the magic happens as it creates and honest moment in the conversation.

On camera / Face to face

First things first; I wouldn’t wear shorts on camera. It doesn’t matter what argument you may have, no one wants to see your knobbly knees, always wear closed shoes, wear clean clothes and don’t chew gum. You’re on camera, dammit, have some decorum.

On camera is prime time when it comes to artist interviews. They’re highly sought after but difficult to organise. It’s not uncommon they’ll fall through at any moment; things happen, people cancel, life moves on. But when you manage to get rolling, it’s worth the fuck around.

Be prepared for plenty of bounce back, but not too prepared… I’ll try that again… Be prepared to let it come naturally.

My advice is to not to have notes on camera. As a guy who started off literally reading questions off a laptop, trust me – going question commando makes for better on camera interviews.

Don’t try to remember questions. Remember key facts – titles, locations, dates, names. Flow with the social script of a conversation and embed them throughout to avoid rigid questions.

DON’T bust anything on the artist, not a high five, not a surprise challenge, none of that.

I’ll also say BE EARLY. Arrive on location at least 30 minutes in advance. Unless you’re Oprah, the band is the one doing you a favour in this dynamic and it’s unprofessional to keep them waiting. Set up quietly, and bug out quickly.

I’ll add this one in homage of my publicist friends. On location interviews are a huge pain. Not only are you dealing with hungry, jet-lagged artists, you’re at the behest of mother nature.

As media, be prepared to stick and move. Organise Plan B’s and C’s. If it’s raining, set up at a nearby pub, but always ask first if they allow filming there.

Don’t make wild requests that will take the artists too far from where they’re coming from, or need to be. Best case scenario is either at their hotel or backstage at the venue between soundchecks. Don’t drag them into the crowd and don’t put them in your dirty car.