The Brisbane guitarist, songwriter and producer collected the spoils at a ceremony Wednesday night in Brisbane, where he beat out fellow finalists Harriette Pilbeam (Hatchie), Georgia Potter (Moreton) and Leanne Tennant.

The annual prize, now in its 13th year, honours the musical legacy of the late Go-Betweens great Grant McLennan, who passed away in May 2006 at his home in the West End, aged 48.

Bratt now receives a golden opportunity to travel to either New York, London or Berlin for up to six months, where he’ll be encouraged to immerse himself in a foreign culture to help seed and nurture his own creative talents. He chose the Big Apple.

Bratt writes and performs with Golden Age of Ballooning and has co-produced Clint Boge’s debut album The Butterfly Effect and recorded guitars on ‘Star’ by Greg Chipello for SBS television series Robbie Hood.

“Not only is it an absolute pleasure to be recognised amongst the other finalists who are amazing songwriters, but to receive an award named after the late great Grant McLennan means so much to me,” Bratt said.

With his victory, he will visit New York next year where he plans to write songs for a debut solo LP and “soak up everything the city has to offer.”

Watch Chad Smith jam with Jack and Harry from Golden Age of Ballooning: 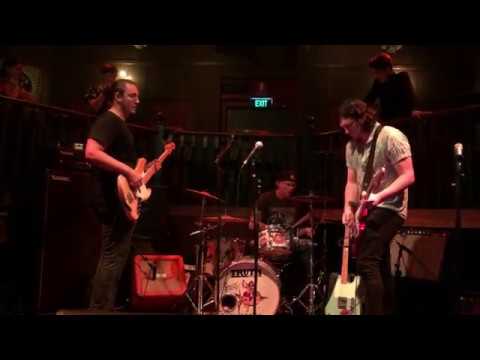 “This Fellowship is career-changing and will allow Jack to develop his artistic skills whilst widening his global networks,” commented QMusic CEO Angela Samut on the night.

The Fellowship, or “Grant’s Grant,” as McLennan’s sister Sally calls it, is jointly-funded by the Queensland Government through Arts Queensland, APRA AMCOS and presented by QMusic.

The ceremony segued into QMusic’s annual Christmas party at Smoked Garage in the Fortitude Valley, which was attended by the likes of Michael Crutcher (QMusic chairman), Haug, DJ Katch (Resin Dogs), and will be long remembered for the downpour outside which ended a months-long dry spell in the Queensland capital.