“There are people out there who are notorious for taking your money because of direct or indirect association with someone or an actual label,” said D-Teck, birth name Dwayne Grant. “First of all, if you get an email that’s not from a corporate email […]  then you should have your antennas up.”

DJ Pain 1, birth name Pacal Bayley, said many scammers even use the Def Jam Records letter head in their communication with unsigned artists.

“I’ve seen many Def Jam letterheads. For some reason Def Jam is the go-to label to impersonate if you’re a scammer and they’re reaching out to people and saying, ‘Yo, we really like your music, all you got to do is spend $500 and send it to us so we’ll book your [plane] ticket’.

“There are a lot of common sense red flags that people should look out for,” he continued, “but a lot of people just get so excited because they feel validated by the possibility of getting attention by a label.” 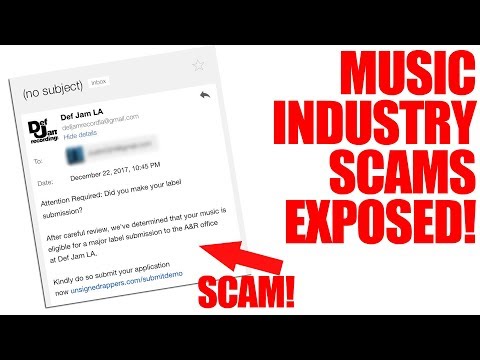 While the role of A&R has changed a lot in just the last 24 months alone – the digital paradigm shift placed artists at the centre of their own career  – but D-Teck says that while artists shouldn’t expect any label rep to ask for money, many working label A&Rs are involved in the scam.

“Sometimes some of the most official people in the business are some of the [worst]. they can be hustlers as well,” he said.

DJ Pain 1 said some artists believe they can only achieve career success if they sign to a label. D-Teck had this to say to any artist looking for a label deal:

“They should really focus on making sure that their brand is so powerful. Everybody’s ambition is different, some people want to be on a label not because of money, just to say they’re signed – some people are not business people.

“That’s sad but I’ve seen it happen over and over again. I’ve even offered deals to independent artists and they will pick the one that’s not good for them because of the name that’s associated with it,” he added.

D-Teck says “branding is everything”

“Once you’re branded properly you don’t need the label’s help. Be consistent and continue to grow your fanbase,” he said.

“Look at Cardi B, people love her for her. People are going to fall in love with you for different reasons, you’ve just got to give people yourself and you’ve got to package that and sell it the best way to can to the targeted people that [will] buy it.

DJ Pain 1 co-founded Music Entrepreneur Club, which charges artists a US$99.99/yr membership fee and offers “real information from established professionals.” According to its ‘About’ page on Facebook, the company’s staff “meet two times a week to discuss what you need to know about the music industry.”