He starts next week. “Plot twist, I’m back on your radio”, Linsday McDougall announced, sharing news that he will be moving to ABC Illawarra.

The Doctor will be hosting the newly-minted Illawarra Drive program, which launches next Monday and runs from 3pm-6pm on weekdays. He’ll be joined on the mic by Rory McDonald (ABC Grandstand) and Jack Cupitt.

Plot twist, I'm back on your radio! (Well, some of you). I'm hosting a brand new radio show on @973ABCIllawarra from 3-6 weekdays. I start next Monday, January 22 and I can't wait! As I think I mentioned, I love this place. pic.twitter.com/tb3rIjBmZB

McDougall has a long-standing relationship with ABC, having joined triple j in 2005 to host the Breakfast show with Jay Whalley, and later Myf Warhurst. He left radio in 2015, though evidently not for too long.

This move comes at a good time for both the station and McDougall, with ABC Wollongong adding mobile and online streaming by March.

Until then, make sure you stay locked to this end of the dial. 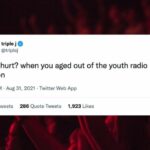