It looks like triple j may have lifted their silent ban on Sticky Fingers, after their track 'Australia Street' was played during Requestival today.

It looks as if triple j has lifted their silent blacklist on Sticky Fingers.

In June 2018, The Industry Observer revealed that triple j had silently boycotted Sticky Fingers. Data collected from J Play — the now-defunct industry resource that once showcased the artists and songs that are played on triple j radio in Australia— revealed that Sticky Fingers were no longer being played on the youth broadcaster.

Now it seems that triple j have lifted the ban amid their week-long Requestival. The station played the bands most popular cut, ‘Australia Street’ earlier today — marking the second time triple j has played the music of Sticky Fingers this year.

In January, the station executed their monolithic Hottest 200 of the Decade countdown. The listener-voted playlist saw Sticky Fingers appear four times — with Caress Your Soul tracks ‘Caress Your Soul’ and ‘Australia Street’ coming in at #140 and #15 respectively, whilst Land of Pleasure tracks ‘Gold Snafu’ and ‘Rum Rage’ coming in at #58 and #33.

Up until the Hottest 200 of the Decade countdown, Sticky Fingers had not been played on triple j since April 2018, following that trainwreck interview on triple j’s Hack segment, where frontman Dylan Frost defended himself from allegations of violence and threatening behaviour with the nail-in-coffin line “boys will be boys”.

Though the station never made an official statement on the matter, the band remained absent from the triple j playlist, causing bassist Paddy Cornwall to attack the station’s apparent blacklist just last year.

Requestival marks the first time the station has played a song by the band on their own volition. Which begs the question, has the station lifted their ban?

triple j reportedly received 73,000 requests during Requestival, avoiding playing the music of an act so detested by the Australian public would have been as easy as pandering to a listener’s ironic yearning to hear a Sugababes classic.

Love this article?
Shout S. B. Williams a beer 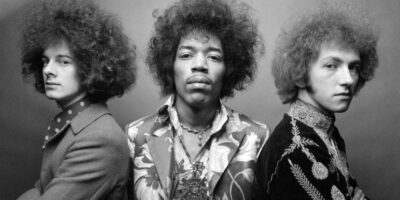 The Hendrix estate is suing Experience’s bassist and drummer