Could Matt & Alex return to radio? Matt Okine says he “wouldn’t rule it out” Ever since Matt Okine teamed up with Alex Dyson to co-host triple j’s Breakfast back in 2014, the pair have been considered one of the most enjoyable pairings in Aussie radio’s recent history. Now, over a year since the duo left our airwaves, Okine has revealed he “wouldn’t rule out” a return to the airwaves with Dyson.

Back in 2016, it was announced that Matt Okine and Alex Dyson were set to leave triple j’s Breakfast in order to pursue other interests, leaving the door open for current hosts Ben & Liam to take over.

Since then, Okine has kicked off his musical career under the name of Boilermakers, while also writing and starring in Stan’s The Other Guy. Meanwhile, Alex Dyson has since made his return to triple j after some time overseas, taking over the Lunch spot.

However, according to an interview for The Ferg Neal Show, Matt Okine says that he wouldn’t be opposed to teaming up with his former co-host again.

“I wouldn’t rule out,” Okine revealed. “I doubt if we did it it would be with triple j, because we are getting old.”

“You can’t have a bald old guy and a guy who can’t play soccer without dislocating his elbow every ten seconds running around a youth radio station anymore.”

Matt Okine also revealed that his decision to leave triple j was made because he “didn’t want to start not liking it,” but explained that now that he’s had the chance to reflect upon his time on air, he could see himself returning.

“Now that I’ve had a bit of time away, suddenly I can look back and go, ‘Oh yeah okay well I would almost be ready to maybe do something like that,’ but it all depends,” he explained.

“We just couldn’t go back to triple j because you want younger people to be taking those roles,” Okine continued. “I don’t want to be taking jobs from the youth. So it would probably have to be a commercial station.”

So while it remains to be seen whether or not we’ll be seeing Matt & Alex teaming up on the airwaves again in the future, we can definitely say it’s something that has crossed Matt Okine’s mind, so you can throw this one in the ‘maybe someday’ pile. 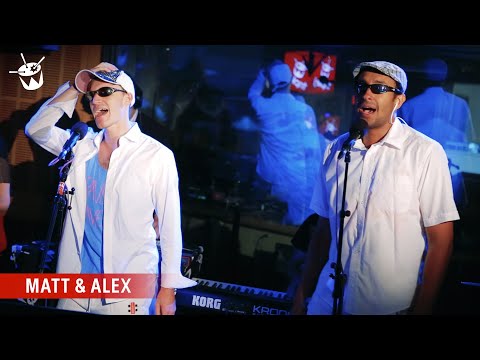