Pop-up concerts have been everywhere over time. From buskers, the original pop-up musicians, to pop-up venues, folks either love or hate being given surprise concerts. But now, a US airline Southwest is set to take pop-up gigs to the next level, as they bring concerts to the skies.

As Billboard reports, Warner Music Nashville (WMN) have teamed up with the famously affable Southwest Airlines to continue to bring live music to the skies.

The new deal is set to see a number of WMN artists take part in Southwest Airlines’ sporadic ‘Live At 35’ concert series, which turns real-life bands into in-flight entertainment. An announcement video from the airline shows Devin Dawson, a US country musician, surprising his captive audience with an impromptu gig as he takes over the first couple of rows of the flight.

Dawson’s performance concluded with the musician walking the aisles, conversing with passengers and handing out CDs and guitar picks. “That was a little bit different than what I usually do every day,” said Dawson after the flight landed.

“You know, some people don’t really enjoy flying; some people get very nervous and don’t like it,” he continued. “I hope that something like this [performance] is just a cool surprise for some [passengers] that helps them forget about their everyday woes, and I’ll just play a couple of songs to make them smile.”

Southwest began their ‘Live At 35’ concert series as a sporadic curiosity of sorts back in 2011. Since then, a large number of bands have taken part, including Andy Grammar, Five For Fighting, Better Than Ezra, and the Barenaked Ladies. These performances have been a huge hit on various social media sites, with these gigs going viral as plenty of music fans had their interest piqued with these unique concerts.

Of course, some people haven’t been too pleased with this announcement. Despite Billboard noting that the ‘Live At 35’ concerts have “only grown in popularity over the past six years,” it looks like some high-flyers aren’t too keen on the announcement.

Customers: You know, free WiFi would be nice

“Would you like cover band X or Y with your flight today?”

If you’re interested in seeing what these gigs look like, and what you might be in for if you ever find yourself flying from Oklahoma to California, then check out Southwest’s website to see their announcement performance from country muso Devin Dawson.

Check out Barenaked Ladies performing for Southwest Airlines’ ‘Live At 35’: 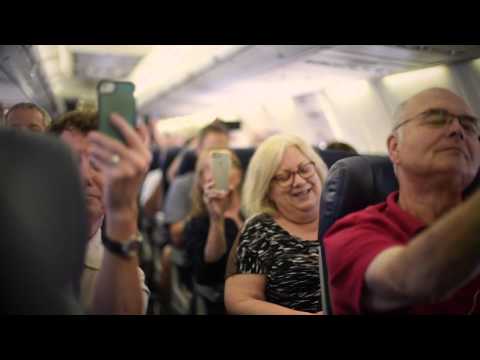