TIO took a tour of Splendour XR’s digital grounds and discovered an interactive experience that takes the festival brand to the world. When Splendour opens its virtual doors later this week, expect the usual thrills, without those mid-winter chills.

TIO’s Lars Brandle took a tour of Splendour XR’s digital grounds and discovered an interactive world that, just maybe, could live on alongside the post-COVID festival experience.

All the great music festivals are destinations, with road trips built in. Think Coachella. Glastonbury. Burning Man. Splendour In The Grass.

Destinations don’t come much dreamier than Byron Bay, and Splendour, with its traditional mid-winter slot, and camping options, stands alone in these parts.

Splendour doesn’t stand alone in the damage inflicted by COVID-19. When the pandemic wiped out 2020, organisers pushed back the event, more than once, then took a professional gamble.

Co-founders Jess Ducrou and Paul Piticco drew up plans for a virtual event, the fruits of which will be picked later this week.

Businesses, we were told, had to pivot to survive. With Splendour XR, Ducrou and Piticco pivoted hard.

Splendour XR is both a platform for music and art, a space to play, and a tribute to big ideas made real, or in this case, almost real.

From the moment your avatar strolls up to the gate, you’re faced with the full Splendour experience. Cops and sniffer dogs. If there are amnesty bins, you can’t see them for all the boys in blue.

A Jimmy Brings van hangs to the left, its main man glares back. Click on the beardy man, and Jimmy brings your drinks order. In the real world.

A stroll through the grounds and Splendour’s seven distinct spaces are like a trip down memory lane.

And, of course, there’s music.

More than 50 acts perform precorded sets in the Splendour XR world, including headliners Khalid and The Killers. British producer and artist Charli XCX delivers one of five green screen performances.

Rome wasn’t built in a day, and nor was Splendour XR. In reality, it took more than a year.

The platform is an offshoot of Linden Lab, which developed Second Life, a virtual game that sprung to life in the mid-2000s. The technology has the benefit of years of testing, weeding out bugs.

Prior to the pandemic, Splendour’s place in the Australia’s festivals calendar was enviable. A camping festival in paradise with entertainment provided by the best acts in the business is never a hard sell, and a sell out was a regular sight.

By building an interactive digital world, Splendour can go where it hasn’t gone before: Into the senses of international music fans.

More than 20 per cent of all tickets have been purchased outside Australia, Ducrou explains. Virtual tourists will come from the U.S., Japan, the U.K. and elsewhere.

In time, after the re-live experience comes to its conclusion, Splendour XR will be switched off. But unlike the physical festival, it doesn’t need to be packed down.

When a sizeable investment is committed to research and development, it’d be a mistake to not flick the switch again.

“Getting the name Splendour out there globally has been great. And we’ll certainly grow the profile of the festival, for a number of reasons too,” says Ducrou.

“It helps us secure the right artist to come and play but, also, future audiences may plan a trip down here around the festival. The marketing angle has been great. But the future, also, is that bolting onto the real festival allows accessibility. Global accessibility.”

Splendour XR will be available on mobile, tablet, browser, desktop and VR from Saturday July 24 & Sunday July 25. Tickets are priced from $27.99. Visit splendourxr.com for more. 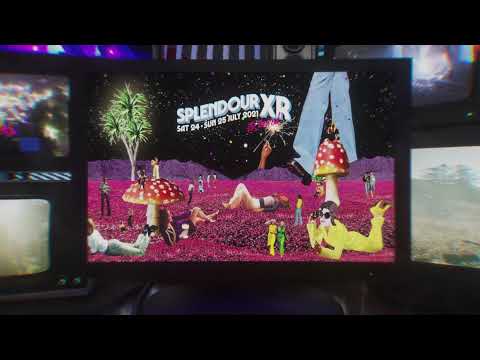