Taylor Hawkins’ death is a sharp reminder of our own mortality, and to be good to yourself (Op-Ed)

The passing of this livewire Foo Fighter who, at 50, was still very much in his prime, is just wrong on so many levels. There’s something about Taylor Hawkins’ death that just isn’t right.

True, we all go at some point, and few of us can accurately predict how, when and where that will go down.

The passing of this livewire Foo Fighter who, at 50 was still very much in his prime, is just wrong on so many levels.

The Foos are neither a heritage act, or a generic pub rock outfit. When they’re in cycle, they’re the hottest act on the planet, when you take into account the metrics of hits, sales, box office and chatter.

The Foos are in cycle.

Foo Fighters are the biggest band on the planet, and maybe the busiest band on earth.

Dream Widow is the Foos’ third album release of the past year, including the rockers’ “Dee Gees” album Hail Satin, a tribute to the Bee Gees, and their tenth studio album Medicine For Midnight, which opened at No. 1 on the ARIA Chart, for the band’s eighth leader.

Their 2022 global stadium tour, which would include a route into Australia and New Zealander later in the year, would confirm it, their recent date in Geelong a taste of rock to come.

Hawkins and Co. were inducted into the Rock And Roll Hall of Fame in 2021, entering the shine in their first year of eligibility.

Rock stars just don’t leave us when they’re on top. It’s not written into the script.

News broke here Saturday of the tragedy. Hawkins was found unresponsive in his hotel room in Colombia, where the band was due to perform, a stop along the route of the Foos’ South America tour.

Those shows are now postponed, or cancelled. There is a difference, but it’s too early to know which word applies.

So incredibly sad to hear of the passing of Taylor Hawkins. My thoughts are with his family and the band at this time. pic.twitter.com/wueydCu5gw

Hawkins, the blonde Cali animal behind the kit, the ever-present, Eveready battery, always demanded attention. Only Dave Grohl, his bestie and musical partner in crime, commanded more of the spotlight. He’s all over the Netflix drumming documentary Count Me In, placing him among the greatest who’ve tamed the instrument.

Social media opens for us a window into the hearts of minds of other stars of rock musicians.

Right now, it’s a world of hurt as artists from Mick Jagger to Liam Gallagher, Ringo Starr and Tom Morello remember the man as a gift, as a flame that burned twice as bright.

Spare a thought for Grohl, who has been through this nightmare before when Kurt Cobain took his own life in 1994, and a near miss in 2001, when Hawkins overdosed while on tour in the U.K. He recovered but it was touch and go for a couple weeks.

If Grohl is the brains behind the Foos, Hawkins, a married dad of three, was the skin that kept it all together.

What happens next with the Foos is something only time will answer. The band and their extended team will need time to grieve and recover. There’s no entry, no rulebook that dictates how a band reassembles after tragedy.

Is there a lesson in all this? There always is, though in the fog of it all, made considerably more opaque thanks to some of the sensational headlines flying around on the nature of Hawkins’ death, it’s tough to stay grounded.

This much is true. Hawkins’ untimely death is a stark reminder that our journeys all come to an end, no one is excluded.

Make good use of that precious time. And look after your body. It’s the only one you’ll get. 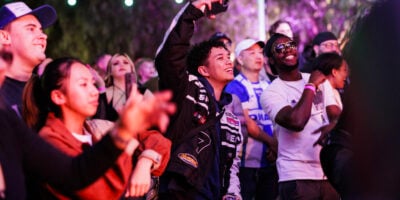