Kanye West was quite correct when he claimed the 2006 clip for his single ‘Touch The Sky’ should have won the MTV Music Award for Best Video. As he explained (read: ranted) at the time: “It cost a million dollars, Pamela Anderson was in it. I was jumping across canyons.”

Three good points. But one person who didn’t agree with this assessment was the then-68 year old daredevil Evel Knievel, who took umbrage at the artist’s parody of him (as Evel Kanyevel) especially considering it was specifically a play on his failed attempt to jump the Snake River Canyon in 1974 on a rocket-powered motorcycle. Like Evel in 1974, Kanye fails hard.

Knievel filed a lawsuit claiming copyright infringement relating to his name and likeness, calling the clip “vulgar and offensive” and damaging to his reputation. Keep in mind this is a dude who leaped things on motorcycles for a living.

“That video that Kanye West put out is the most worthless piece of crap I’ve ever seen in my life, and he uses my image to catapult himself on the public”, he ranted at the time.

“The guy just went too far using me to promote his filth to the world. I’m not in any way that kind of a person.” 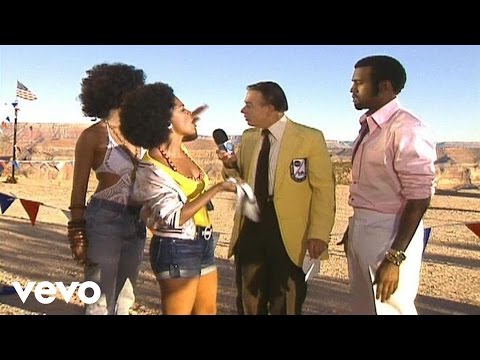 Kanye managed to smooth things over by flying out to Florida to visit Evel in his home. The pair sat down and came to terms, and Evel seemed swayed by Kanye’s charm.

“I thought he was a wonderful guy and quite a gentleman,” he told the BBC. “We settled the lawsuit amicably. I was very satisfied and so was he.”

He was also touched by the recent passing of Kanye’s mother. “I know he’s had some tough times the past few weeks, and I hope things work out.”

Evel Knievel died just two days after giving those quotes. He was 69.