The old adage of the industry suggests that an artist’s success hinges on who you know, not what you do. However, all the contacts in the world are no replacement for genuine hard work and an independent spirit. The Teskey Brothers out of Melbourne are a band that exemplifies how doing it your own way can lead to a dedicated fanbase.

“It’s been amazing, it melts my heart,” says lead singer and guitarist Josh Teskey about the band’s significant rise over the past year.

Teskey began playing music as a kid, busking the blues on a weekend with brother Sam before the pair joined up with longtime friends Brendon Love and Liam Gough to form The Teskey Brothers a decade ago, cutting their teeth as the backing band for Ella Thompson while still in their teens.

“For years we’ve been playing a lot of the regular venues, out our way there’s St Andrews pub, we played the Rainbow Hotel regularly in Melbourne, we’d just play every weekend for the last ten years really.”

Last year, something changed. Half Mile Harvest, the band’s debut album, was self-recorded and produced in the band’s own Warrandyte home studio. It was as organic a process as you’d expect from a band whose sound draws heavy influence from old school blues and soul. On first listen the record is immediately reminiscent of the Stax Records acts of the 60s – and it’s no accident, says Teskey.

“Sam is a fantastic engineer, and he got hold of this Studer A800 tape machine, which is the core of his studio and really the album – we wanted to record specifically to this tape machine,” he says. “We wanted to try not using any computers, and go through the recording process that the old artists would have back in the 60s and 70s, the people who influenced us.

“We wanted to make this record that had this old sound. We love the sounds we get out of Sam’s equipment and getting that crunch, that analogue distortion when you’re running hot into the tape machine, that was the inspiration for us to record the album at all.”

In fitting with the band’s DIY approach, they released the album entirely on their own. It would go on to reach the Top 20 on the ARIA album chart and #1 on the AIR Independent Album chart, picking up a slew of fans and resulting in several sold-out headline shows along the way.

“We just kind of went into the deep end with it,” laughs Teskey. “It was never a thing of wanting to be popular – it was just the music we loved and recording in the way we wanted to. At the time we had no representation or management at the start of 2017 – it was just the four of us having a go at it.”

Teskey and co. did it old school – dropping CDs into the pigeonholes of community radio stations with a handwritten letter

“Community radio here in Melbourne was really what pushed it, on stations like PBS and 3RRR particularly. All the blues and souls shows gave it a really good spin and it stemmed from that.

“From there we’ve learned a lot along the way, we’ve really progressed from there. It was a fun journey doing it that way, running everything yourself is terrifying as well. As the year went on, we’d get calls from industry and we had no idea what we were doing. It was crazy. We’ve got a bit more help now which is great, we’re kind of building the team around us now which is much more helpful.”

“I own a venue in Melbourne called Some Velvet Morning. At the time I was booking gigs there and I booked the band based on the music I heard on their Bandcamp. They played a month of Sundays in February and by week three I was very intrigued,” says Furze. “I’d gotten to know them and realised they were very down to earth guys, very genuine musicians and very genuine people.

“They had this connection with their fans; it was a small fanbase at that point but it was an amazing connection and I was taken by the music in a similar way. We chatted for a month or two, and that’s when I got excited and decided to work with them.”

Furze realised the band were accomplished musicians, songwriters and producers – and took on a role that saw him as a strategist. “I do the admin side of running a business, which they didn’t know too much about I guess before we started working together. It’s filling that gap in what they knew and facilitating the relationships with third parties, booking agents, promoters, that sort of thing.”

Furze says it was important for him to recognise the band’s independent nature while showing them the possibilities available to them.

“It was an interesting conversation because I’d been working in the industry six or seven years prior to that and worked in some pretty serious projects, and I was discussing future plans with a band who had really just done it off their own back in a locally-focused way.

In 2017, those possibilities would include the band touring across the country, performing sold-out headline shows before traveling overseas to play packed showcases in LA, New York and London as well as a New Zealand tour with Angus & Julia Stone.

The support caught the band off-guard, says Teskey: “It’s mind-boggling really, to get there and have people singing along to songs you wrote in your bedroom. Especially going over to the States and playing over in New York and the Rockwood Music Hall there – we had a full house there and you just think, hang on, how – on the other side of the world – do people here know these songs?

“Especially to be doing it in New York and in the home of blues and soul it showed us you can do it over there. It’s terrifying to bring that kind of music to America and see what they think about a bunch of guys from Warrandyte playing this stuff – it was an incredible experience for me.”

With the digital age, Teskey says streaming platforms like Spotify were a huge boom

“Every time we’d chat to people overseas and ask how they’d heard about us they’d just say they’d stumbled across it on Spotify or whatever and started following us. Spotify is huge for it I think”.

This year will see a re-packing of the Half Mile Harvest for overseas territories as well as the band continue to bring their live show to international audiences – something both Teskey and Furze are noticeably excited about.

“They’re one of the best live bands I’ve ever seen,” says Furze, who adds that he wanted to make sure if the band were going to play shows, they’d have great agents working with them who’d realise their potential.

“We’ve got three agents – one for Australia and New Zealand, one for America and one for the UK and the rest of the world – and those people are all top of their game in those markets. We’ve begun routing tours around the world and I’m really excited about the opportunities that are coming up through those avenues because I just know that when the band gets in front of people they find themselves a whole new fanbase every time they play. Their recordings are amazing, but I’m so excited to take them on the road this year and see the response first-hand that US and Europe have for this kind of music.”

Teskey says the band will be playing a number of festivals they’ve regularly attended – including the Riverboats Music Festival and Bluesfest in Byron Bay.

Following will come debut headline tours in New Zealand, as well as the States, Europe, and homecoming shows in the middle of the year. Their plan to building an audience overseas? The same as how their influences did back in the day – and similar to how they built one here; through organic word of mouth, getting on the road and playing as many shows as possible”.

“We’re just going to push everything we can, which is totally exciting for me,” says Teskey. “I’m over the moon about it.” 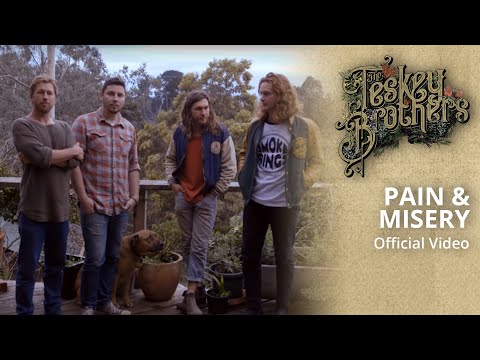