Tones And I just scored an early Christmas present: a U.S. top 10.

‘Dance Monkey’ this week cracks the top tier of the Billboard Hot 100 for the first time, rising 13-9 on the latest chart, TIO can confirm.

Tones (real name Toni Watson) performed her global hit last week during the Top 8 eliminations episode of NBC’s The Voice, and it appears to have paid off.

Prior to her stint on the popular TV talent show, ‘Dance Monkey’ was losing ground on the singles chart, slipping from its peak position of No. 11 to No. 13. Now, it has a new peak in its 10th week on the survey.

The viral track has dominated sales charts around the world, going to No. 1 in 20 territories. But the United States is an altogether different creature. Sometimes the cream takes a long time to rise to the surface.

In October of this year, Brit Lewis Capaldi saw his weepy ballad ‘Someone You Loved’ reach No. 1 on the Hot 100 after 24 weeks, completing the fifth-lengthiest climb to No. 1 all-time.

And the latest survey is led by Mariah Carey’s evergreen “All I Want for Christmas Is You,’ which completes its mission to hit No. 1 a full 25 years after its release.

Watch Tones And I perform ‘Dance Monkey’ on ‘The Voice’:

As 2019 comes to a close, Tones needn’t bother making a new year’s resolution. The Victorian singer and songwriter exceeded all expectations, going from busker to international record-smasher in a calendar year.

Along the way, ‘Dance Monkey’ has owned the ARIA Singles Chart for 20 consecutive weeks (and counting), setting a new mark for the longest streak at the top.

In the U.K., the song has ruled the national chart for 11 weeks, setting a new record for a female solo artist. Tones also bagged four ARIA Awards, scored a guest slot on The Tonight Show Starring Jimmy Fallon and became the first Australian artist selected for YouTube’s Artist on the Rise programme.

‘Dance Monkey’ has now clocked up more than a billion streams across all platforms, hitting the milestone in a time faster than any other Aussie artist.

Watch Tones And I perform ‘Dance Monkey’ on ‘Kimmel’: 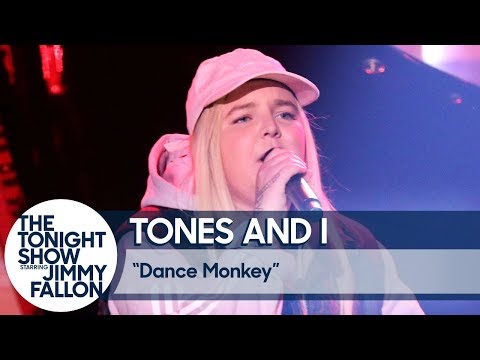