From Peking Duk and Dean Lewis, to Brockhampton, Charli XCX, Mark Ronson, Ice Cube and A$AP Rocky, some of the globe’s biggest names have taken part over the years.

A quick glance at the all-star lineup featured in this year’s ‘True Crime’ parody speaks volumes about the hours and planning that go in to each clip. From getting Steve Aoki to play a courtroom judge, to having Kwame play the defence attorney, and having Broods dress up in prison jumpsuits, this year’s cut was as genius as its predecessors.

One of the masterminds behind each Hottest 100 trailer is triple j Video Producer Tim Pass.

Check out our Q&A with Pass below where he chats about how he got the role, the secret to their virility, the inspiration behind the latest trailer, and more.

Which Hottest 100 trailers have you created?

Together with Jess Hallay (triple j Video Producer) we made this year’s ‘True Crime’ parody, as well as 2016’s ‘Dankest Earth’ with Dr Karl. Prior to that I worked with Dave May on the 2013-2015 trailers including the popular action film one.

How did you get the job?

I started as the Video Producer at triple j in 2013. We decided to create the star-studded Hottest 100 videos as a celebration of all the great music we play each year.

What’s your secret to creating each genius theme?

A lot of brainstorms. We cycle through tonnes of ideas before we settle on each theme, and even then it changes constantly as we shoot. There’s a lot of trust placed in us by management that we’ll be able to pull off our vision on a very limited budget. So far we’ve been lucky!

What was the inspiration behind the latest trailer?

The true crime parody was Jess’ idea. It was topical (with a new one popping up on Netflix every other week) and it presented an interesting challenge of incorporating all the musicians across different mediums. ‘American Vandal’ was a big influence. It’s a really well executed true crime parody that nails all the tropes of the genre.

Watch a blooper reel below: 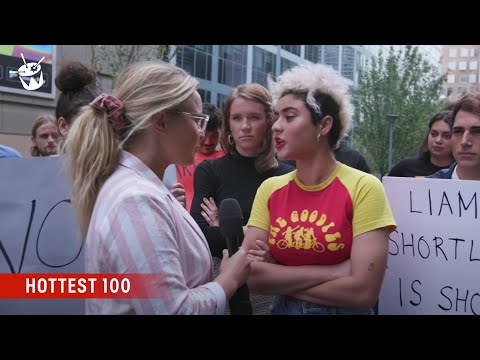 When does work start on each trailer and how long do they take to make?

We start thinking about next year’s idea as soon as we finish the current one and we start shooting as early as Easter some years.

We’re constantly re-writing the script throughout the year, based on musician availabilities, improv on set and current events. It can be stressful at times but worth it when you see the final product.

How do you get the big name international acts on board? What are those discussions like?

The idea has to be simple enough to pitch to an artist in one sentence. Often they only get given the context of the scene they are in, without knowing the rest of the story, so there’s a lot of trust there.

We also usually only have very limited time with touring acts, so we’ll set up cameras and lights, and they’ll walk in, do one or two takes and be out the door in under five minutes.

Which artist is the most fun to work with?

I’m often surprised by how much some of the artists get into it. Peking Duk are always fun to shoot with, but I was really impressed by some of the solid acting this year. Amy Shark nailed her suspicious gossiper, and Kwame’s defence attorney improv stunned the room.

It’s too bad you only get to see three seconds of each in the final edit.

Do you feel pressure year-on-year to outdo the previous year?

Each year is a blank slate. We try to come up with something fun and unique… but yes.

What can we expect from the 2019 trailer?

You’ll have to wait til Hottest 2019 launches for that!

Where else can we see your work?

Every week, Jess and I film and edit Like A Version, as well as interviews, short-form docos, sketches, festivals and live music for the triple j, Double J and Unearthed family.

We also recently collaborated with ABC TV to film the new live music TV show ‘The Set’, which was a lot of fun.