With bounce, swagger and syncs, Confidence Man take their show to the world Sync or swim? Why not have both.

Today, Sync can mean so much more than a bonus stream of ancillary income or a sugar hit. The right record twinned with the right campaign can turbo-charge a song, an album, and an artist’s catalog. Sometimes, a raft of sync campaigns can power-up an act, lifting them to festival heavyweight status, and into far-flung markets. Confidence Man has the right tracks, the right campaigns and their story is blowing up.

When a plan comes together, the right response might be to just sit back and marvel. Stu McCullough has played a key part in the border-crossing story that is Confidence Man, who join The Jungle Giants and others on the books for his company Amplifire, the Brisbane-based artist management and label services company.

Last week, McCullough could’ve been excused for letting it all soak in. A grueling 12-week tour of Europe paused briefly at London’s Scala, a sellout for Confidence Man’s last show in the capital this year. The group, featuring Janet Planet, Sugar Bones, Reggie Goodchild and Clarence McGuffie, had the crowd of 950 jumping for a few hours.

“They were climbing anything that resembled a dance floor,” McCullough recounted on social media. Just two months earlier, ConMan played – and sold out – London’s Village Underground.

Next stop: festival slots in Italy, Cornwall, Portugal, Belgium, The Netherlands and France for the last two weeks of the tour before Listen Out shows in Australia in September. “It’s been quite the adventure really,” McCullough tells TIO. “The offers keep coming in and we have to turn down a lot because we can’t fit them all in.”

All the ingredients are in the mix with this particular Australian success story. Talent, tunes, a live show, hard-work, and a professional network that extends across the globe. That team extends across Europe, where Confidence Man enjoys the support of independent music company PIAS (parent of Australia’s Inertia Music), and into the world of synchronisation, or “sync” in shorthand, through an arrangement with U.S. based music licensing and publishing firm ZYNC, a specialist in placing music into visual media, from TV to film, ads and games.

Confidence Man is hard to pigeonhole. They’re dancey, but not EDM. It’s pop, but not as you know it. There’s a touch of Groove Armada, but they answer to nobody. And you know their stuff, even if you didn’t realise it.

The live shows are the driver of ConMan’s breakthrough in Europe. Syncs are hitting a groove, turning things up a notch. Without fanfare, their music has powered campaigns for the world’s biggest companies, including four spots for Apple, the No. 1 company by market cap and the first trillion-dollar business, the flat-pack furniture king IKEA has launched big-spend campaigns with ConMan’s Music, including the clever “dancing aprons” spot, which features “Boyfriend,” lifted from the group’s 2018 album Confident Music For Confident People.

For Australia, the IKEA campaigns were particularly intensive, with full TV radio and online pushes, the immediate impact of which can be felt in digital consumption.

“We’ve seen songs sitting at No. 25 in our all-time streaming catalogue into the top 10 off the back of a very good campaign,” notes McCullough. For Confidence Man, “there’ve been syncs from day one, across multiple tracks. I’m sure there will be more. We’ve had some very good wins straight off the bat.”

The conventional wisdom would have it that syncs are essentially promotional devices. And unless you’re managing the copyrights of The Beatles (the producers of Mad Men reportedly coughed up $250,000 for the user of a master recording of “Tomorrow Never Knows”), the cash will clang in our pockets. Not so. “I do think syncs pay well,” explains McCullough. “It’s the nature of each deal, you‘ve got to look at it and the scale and whether music drives it. You do have to keep that mindset of, is this a good campaign to be a part of? We still turn down syncs that aren’t 100% appropriate.”

In another signal of the growing appetite for ConMan’s music, the Aussie act last month signed to ZYNC Powered by Round Hill Music, a newly-formed joint venture of ZYNC and Round Hill Music, the music rights company, an arrangement that promises to mine more opportunities, more sync gold.

“Their music catches your attention within the first 5 seconds,” explains ZYNC co-founder Sanne Hagelsten. “It’s colorful and unique so it stands out amongst the thousands of other songs supervisors, TV networks, film studios and trailer houses are being sent.”

So, what works on screen? “We always need songs in the ad world with a good tempo, drive, that feel bright, punchy and fun, not to mention it helps if songs are incredibly catchy,” says Hagelsten. “In our work we are always looking for upbeat, rhythmic music that makes people feel good. confidence man does exactly that.”

Also, Hagelsten notes, ConMan’s songs give a supervisor or editor dynamics to play with when cutting to picture and moments where they can grab short lyrical soundbites. “It’s rare you find an album like this one where almost every song has those characteristics.”

The band’s success had already been on a few key European tastemakers’ radar ahead of their signing to the U.K.’s Heavenly (off the back of “Boyfriend”), but it really escalated after their performance at The Great Escape in May last year, recalls Vincent Fenice, Director of International at PIAS, who shared the ConMan story from the stage of the Indie-Con in Adelaide. 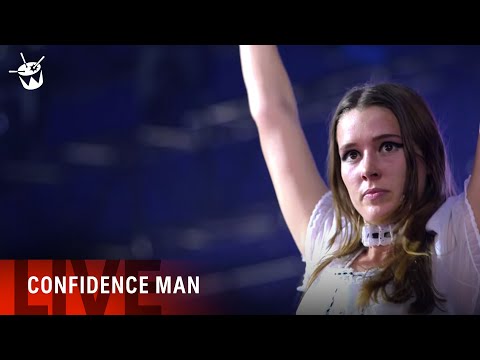 The U.K., France and Germany are climbing on board. “Their style of their music, the energy of their performance and their mindset of not taking everything too seriously was something we had been missing from the music industry in quite a while – and they managed to fill that gap.”

ConMan’s sync story is still in its early days, especially in North America, explains Hagelsten. “We have just started rolling out the music worldwide,” she says.

“We’re on the constant hunt for the perfect places where each song can fit. For us, there will be years of syncs for this album and we will spend the next year hyper focused on rolling out their music on a song by song basis for specific projects and high profile opportunities across ads, film, trailers, TV and video games. We love this band.”